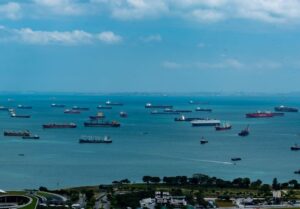 In last month’s report, I pointed out that one of the reasons for the increase in ocean freight and the shortage of containers was the slow handling of containers in the West Coast ports of North America, especially in the ports of Los Angeles and Long Beach. Then, the volume of import containers unexpectedly increased due to increasing consumption from staying at home. As of Aug. 26th, there were 38 vessels waiting for berth in the two ports, and in some cases, it took up to nine days for berthing. However, in the first week of September. (Aug. 30th – Sep. 3rd), both ports managed to handle 171,525 TEUs, which is 1.74 times from 98,667 TEUs in the previous week. Is this the result of increased productivity due to the dockworkers coming back to the field after the increased number of vaccinations against COVID-19? Have they started to cope with this matter seriously? I am hopeful that they can do it. However, the standby time due to the shortage of chassis and trucks at major inland rail terminals in the U.S. has not been resolved yet, and the confusion is expected to continue for a while. It is a National Day vacation in China in early October, and, just before that, there usually is a cargo rush in September. What will happen then to the West Coast ports of North America? 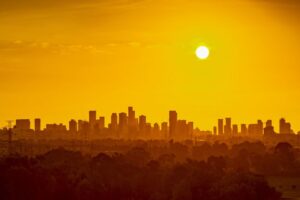 The global economic downturn has been caused by the worldwide abnormal weather conditions in this summer, as well as the the production suspension of related products due to the shortage of semiconductors. The latest damage was caused by Hurricane Ida, which hit the southern part of the U.S. in early September and brought record-breaking rainfall to the eastern part of the country. The New York City subway system was flooded and the states of New York and New Jersey declared a state of emergency. Refineries and oil terminals on the Gulf Coast were damaged, and the U.S. government decided to release oil reserves. It reached 54.4 degrees Celsius in Death Valley, California in the western U.S. in July. Meanwhile, floods caused by torrential rains in eastern Europe, Germany and Belgium in mid-July damaged roads and bridges, causing over 26 billion Euros in damage. In southern Europe, Sicily in southern Italy recorded the highest temperature ever in Europe, 48.8 degrees Celsius, on Aug. 11th. Greece experienced wildfires due to heat waves in July and August, and southern Turkey also recorded the highest temperature of 44.8 degrees Celsius, resulting in large-scale wildfires.

Meanwhile, the Chinese government has decisively enforced urban blockades across China to prevent the spread of COVID-19. It was said that the infection had been brought under control by early April this year. However, at the end of May, some dockworkers in Yantian port were infected, and the port was shut down for cargo handling. Yantian is a major port that handles about a quarter of China’s trade cargo with the U.S., and it was reopened in about two weeks, but a considerable number of container ships had to wait at outside of the port and a large amount of stagnant cargo caused havoc at the port. On top of that, on Aug. 11th, there was an infection to workers in Meishan Terminal of the Port of Ningbo, the world’s third largest port with an annual container handling capacity of 27 million TEUs, and the terminal was shut down. The terminal handles a quarter of the cargo at the Port of Ningbo, so the impact has been enormous. The Chinese government’s awareness of the need to prevent COVID-19 infections is serious. This is because they are preparing to host the Beijing Winter Olympics, which will start on Feb. 4th next year. In addition, the Chinese New Year of 2022 will begin on Feb. 1st. Considering the great migration of the Chinese people during that period, the government is desperate to prevent the introduction of the highly infectious “Delta variant”. However, once people have returned to their normal lives, it seems that the Chinese government will have to impose even stricter restrictions on city blockades, activities, and immigration in order to protect people from the highly infectious Delta variant. The more severe restrictions the Chinese government imposes, the more it will hamper the domestic economic expansion. The global supply chain, which is finally recovering at last, may be disrupted again. It is necessary to continue to pay attention to China’s COVID-19 countermeasures.

On the other hand, China was also severely affected by this year’s extreme weather. In July, Zhengzhou City, the capital of Henan Province in central China received 617.1mm of rainfall in three days. The average annual rainfall in Zhengzhou is 640.8 mm, which means that the city received almost annual precipitation in those three days. This torrential downpour, said to occur “once in a thousand years,” caused a dam to break, forcing 100,000 people to evacuate. It paralyzed the social infrastructure and forced several major auto plants to shut down. The port of Shanghai, the world’s number one port for handling containerized cargo, was closed for several days at the end of July when a large typhoon No. 6 hit the city. As a result, vessels on offshore had to wait for berthing, and cargo handling operations came to a halt, causing confusion. Some containers were transported to Shanghai by land from South China, which accelerated the confusion in port operations. 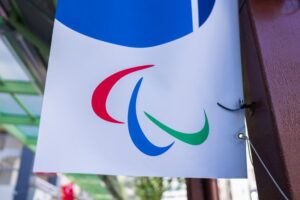 The Tokyo Paralympic Games, which started on Aug. 24th, ended on Sep. 5th after 13 days of competition. A record number of 4,403 athletes took part in the games, competing in 539 events in 22 sports. It was impressive to see the physically handicapped challenging on sports so hard. Watching their attitude, I became convinced that we, the able-bodied, cannot live without the physically handicapped. I strongly felt that the physically handicapped and the able-bodied are two sides of the same coin. I would like to cherish the spirit “WeThe15” (15% of the world’s population is disabled). Will there be less conflict in the world? There is no doubt that it will decrease.