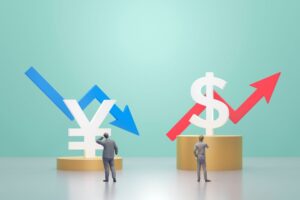 The Japanese yen hit $1.00=¥134 on June 8th, the weakest in 20 years since April 2002. The yen has depreciated by 19% or 21 yen in six months from $1.00=¥113 in January this year. While restrictive monetary policy is underway in Europe and the U.S. to counter inflation, Japan continues to pursue large-scale monetary policy, which seems to be a major factor. On top of that, Europe and the U.S. are aiming to raise interest rates further. The European Central Bank is planning to end its negative interest rate policy by the end of September. If the government and the Bank of Japan do not take any action, further yen depreciation is expected in the near future.

Following the Plaza Accord in September 1985, the Japanese yen appreciated from $1.00=¥260 to $1.00=¥120 in 1988, an 88% or ¥140 appreciation at once. At that time, the government, fearing a recession due to the strong yen, implemented a fiscal stimulus to invest in public works projects, and the Bank of Japan responded by lowering the official interest rate five times to 2.5% in 1987, the lowest rate in the postwar period. Money was flooded in the market, and the public became obsessed with investing their money, and prices of land, stocks, golf club memberships, etc. reached unprecedented high, so much so that it was said that “you could buy the U.S. mainland for the price of the inside of the Yamanote Line”. It led to an unprecedented bubble economy. The bubble economy burst in 1991, Japanese companies, especially in the export industry, had been relocating their manufacturing plants overseas after the Plaza Accord to counter the strong yen. This relocation of manufacturing plants overseas, even for products that were originally competitive even with a strong yen, led to the hollowing-out of Japanese industry, and Japan has not been able to overcome its economic stagnation until now, 30 years later. There is no doubt that the current depreciation of the yen has significant disadvantages. In the U.S., pensioners receive an annual pension inflation adjustment so that their take-home pay is not affected, but this is not the case in Japan, so the take-home pay is reduced in real terms, and life is becoming increasingly difficult for us ordinary people. Does BOJ Governor Kuroda understand this? The average salary increase for major Japanese companies in 2022 was 2.27%. What happened to Prime Minister Kishida’s income doubling plan?

According to the May employment report by the U.S. Department of Labor, the number of nonfarm workers increased by 390,000 from the previous month. The unemployment rate remained unchanged from the previous month at 3.6%. The Federal Reserve Board (FRB) is planning to raise interest rates rapidly and significantly by 0.5% per month from May to July, prioritizing counter-inflation measures, as it believes it will take time to resolve the labor shortage. FRB believes that it will be able to control inflation by raising interest rates, as the ratio of employment offers will rise from the 4% level to the 7% level even if interest rates are raised. Of course, FRB will consider suspending the interest-rate hike if the effects of inflation and rising interest rates affect consumer spending and the housing market, causing the economy recession. We strongly believe that the U.S. will continue to lead the world economy.

According to the first quarter 2022 financial results of major container shipping companies, each company is reporting record high profits. Although the lockdown in China and worsening port congestion in North America and Europe caused delays, blank sailings, and port omissions, shipping volumes remained unchanged as new and charter vessels went into service and secondhand vessels were procured to bring in new shipping capacity. Significant freight rate increases have played a major role. Average freight rates per TEU doubled from the same month last year. In addition, higher long-term contract freight rates and an increase in the ratio of long-term contracts contributed to the profit increase. High freight rates continue in the second quarter, and another strong performance is expected in FY2022.

On May 31st, the Federal Maritime Commission (FMC) released its final report on the issue of rising ocean freight rates and other issues it has been investigating for two years since April 2020. The FMC concluded that the steep rise in ocean freight rates was caused by the COVID-19 pandemic, unprecedented growth in consumer demand, and tight supply-demand conditions due to supply chain disruptions, and not by unreasonable price hikes by shipping companies. It also concluded that many blank sailings by the Alliance were not intended to raise freight rates, but rather were unavoidable in order to avoid port congestion.

On the other hand, shipping companies are also trying to find ways to get shippers to return containers faster. One such program is the CMA-CGM’s Early Container Return Incentive Program, which runs 60 days from May 16th to July 15th in the U.S. . The program, which offers up to $300 for early return of containers to designated points on the west coast of North America and inland depots, was introduced in LA/LB last December and had been effective in reducing 73% of containers held up for more than 9 days.

Maersk is offering the “Container Project” service, which has been applied in Germany and Belgium, for containers returned to Japan too from June 1st. $150 of the total cost of cleaning, repair, and maintenance of the container will be waived, for a fee of 2,000 yen per container, regardless of type or size, and you can also receive a service with no compensation limit for 5,000 yen per container. However, this service is not applicable to SOC, Shippers’ owned containers.

Ocean Network Express (ONE) announced on May 31st that it will build 10 state-of-the-art (13,700 TEU) container vessels equipped with environmentally friendly technology, the first ships owned by ONE since its launch and scheduled to complete in 2025. The company has already had a fleet deployment plan of over 520,000 TEU vessels as of February 2022, including six 24,000 TEU vessels, but all of them are charter vessels appointed by shipowners. In the mid-term plan, it is planned to continue to invest in new vessels of approximately 150,000 TEU each year through FY2030. This is in response to the growing demand in the supply chain. We are greatly expecting ONE, as the total investment amounts, including investments in terminals, DX, environmental technology for decarbonization, will be more than $20 billion.

The Japan Maritime Daily reports that congestion at the world’s major container ports is easing. The number of container vessels berthing offshore per day at the U.S. West Coast ports of Los Angeles (LA) and Long Beach (LB) has been reduced significantly from 90 vessels in mid-November 2021 to 26 vessels as of May 29th. China lifted the lockdown on Shanghai on June 1st. Although the number of container vessels in Shanghai has reduced from 100 in mid-April to 82 at the end of May, port congestion is expected to reoccur once production activity recovers in earnest.

Furthermore, there is a high possibility of congestion at U.S. West Coast ports, depending on the outcome of negotiations for the renewal of collective labor agreements at U.S. West Coast ports. Negotiations began on May 10th but were suspended once and resumed on June 1st. At this point, no significant progress has been made. Negotiations are expected to continue after July 1st, when the current collective agreement expires, while cargo handling operations are conducted.

The average annual income $195,000 of ILWU members is three times the national average wage in U.S. In addition, the PMA pays for the ILWU members’ health care and pension plans (pension package of $102,000 per person), and ILWU members are said to receive some of the best treatment in the world. However, the ILWU is also likely to make the best use of the fact that West coast dockworkers contributed to the historic handling of the cargo amid the risk of a pandemic caused by COVID-19 as an opportunity to improve their treatment.
The ILWU is expected to negotiate in a desperate attempt to improve their treatment. Negotiations are likely to be protracted. However, further mechanization of LA/LB to achieve more efficiency is inevitable.

Sea Intelligence, a European maritime research firm, analyzes that there will be a surplus of 13 million TEU of marine containers after the supply chain disruption is resolved. The company studied German shipping company Hapag-Lloyd for their equipment quantity possessed and the transport volumes over the past 12 years and calculated their operational efficiency. As a result, it is predicted that if supply chain bottlenecks were eliminated at this time, operational efficiency would improve, and the number of containers required by Hapag-Lloyd would decrease by 17%. The number of ocean containers worldwide surpassed 50 million TEU in 2017. It is estimated that total 13 million TEU will be surplus, consisting of 17% of the existing 8.5 million TEU and 4.5 to 4.8 million TEU of new containers expected to be manufactured in 2022. We can easily imagine that shipping companies will begin adjusting their excess inventory from 2023 onward. Leasing companies need to be prepared from now.

New dry container orders for this year (January to May) totaled 1,537,675 TEU, of which 7 of the top 10 shipping companies (MSC, CMA, MAE, EVE, YMT, PIL, and OOCL) accounted for 76%. This shows that shipping companies are switching toward having their own containers. The Top 10, by the way, have a 66% share. This also has a significant impact on leasing companies.
(Translated by Ms. Chizuru Oowada)