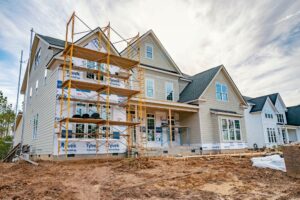 According to the September employment statistics released by the U.S. Department of Labor on October 7th, the number of nonfarm payrolls increased by 263,000 from the previous month, but the increase rate declined for the second consecutive month. On the other hand, the number of job openings in August, which was announced on October 4th, exceeded 10.05 million, but decreased by more than 1.11 million from the previous month. The unemployment rate was 3.5%, an improvement of 0.2% from last month’s 3.7%. Did employees assess the economic outlook and try to find job earlier in the year?
Signs of change have begun to emerge in the U.S. housing market. Since the 2008 financial crisis, COVID-19 fiscal spending and monetary easing have led to the highest existing home sales in 2021 since 2006. However, due to rising interest rates, the 30-year fixed mortgage rate surpassed 6% for the first time in 14 years. When mortgage rates exceed 6%, sales of existing homes, which account for 90% of the housing market, are said to slow down. Meanwhile, there are cancellations of homes that have been contracted for sale. In July, we saw a 16% cancellation rate, the highest except for just after COVID-19 began. This is said to be due to the slowdown in home prices and the sharp rise in mortgage rates. As a result, home sales in 2023 are expected to fall to the lowest level in 12 years. A decline in home prices, the core of household assets, could chill consumer confidence.
Manufacturing Report on Business for September, released by Institute for Supply Management on October 3rd, fell 1.9 points from the previous month to 50.9, the first decline in two months. Some companies are suspending recruitment activities due to the deterioration of new orders. The U.S. Retail Federation forecasts August merchandise imports to fall 0.4% from the previous year, to 2.26 million TEU; September, 3%, to 2.07 million TEU; October, 9.4%, to 2.00 million TEU; November, 4.9%, to 2.01 million TEU; and December, 6.1%, to 1.96 million TEU. Sales for the first eight months of this year achieved a 7.5% increase over the same period last year, and expects a 6-8% increase for the full year of 2022. Retailers began to stock up early in the first half of this year to counter logistics disruptions and have entered an adjustment phase in the second half. The Federal Reserve Board expects zero percent of real growth for the October-December period of 2022. U.S. banking giant JP Morgan Chase has indicated that the U.S. and the world could be pushed into recession in the next six to nine months. 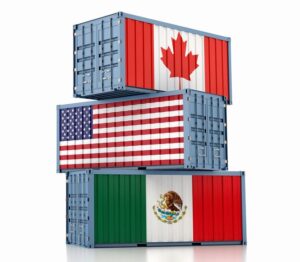 Shipping Guide cites the Drewry Maritime Research (UK) freight rate index released on October 6th. According to the report, the composite World Container Index (WCI) for the world’s eight major routes was $3,688.75 per FEU, down 8% from the previous week, the 32nd consecutive week of price declines and 64% below the previous year’s level. It is down 64% from its peak of $10,377 per FEU in September 2021. It is 1% below the previous five-year average of $3,723 per FEU. Compared to last week, spot freight rates on major routes dropped by 9% ($288) to $2,995 per FEU in Shanghai/Los Angeles, 5% ($391) to $6,887 per FEU in Shanghai/New York, and 13% ($717) to $4,724 per FEU in Shanghai/Rotterdam.
The impact of China’s “Zero-COVID” policy, a two-month urban blockade of Shanghai, on shipments to North America was severe, with September shipments from China to North America falling by double digits for the first time since 2020. It appears that there was no pre-National Day export congestion from China. It appears that only a few vessels are waiting offshore on the west coast of North America at present. Spot ocean freight rates recorded their largest-ever drop of more than $1000 per FEU. Alliances are attempting to reduce the number of vessels deployed by cancelling or suspending services since mid-October, in order to defend against the decline in ocean freight rates due to the reduced demand for cargo movement on North American routes. As the supply chain is being normalized, shipping companies are returning lease containers in North America, while shipping lines are unable to ship back empty containers timely from North America to China and Asia as expected. Sea Intelligence (Denmark), a shipping research firm, warns the number of excess empty containers in North America will reach 4.3 million TEU by early 2023, which will make it difficult to secure container storage space in North American ports. 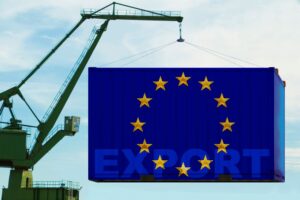 Ten of European associations of shippers, ports, logistics, and transport organizations submitted a letter to the European Commission (EC) on October 3rd, expressing their opposition to the extension of the block exemption regulation (BER) from EU competition law for container shipping consortium. The letter points out that since the renewal of the BER in 2020, the market has drastically changed and that shipping lines have been able to significantly benefit from the market. The regulatory authority stated that it will determine whether to re-extend or terminate the exemptions based on market and consumer relationships. The exemption allows shipping lines with less than 30% market share to join a consortium and jointly underwrite cargo and operate under certain conditions. The current provision expires on April 25th, 2024. Going forward, shipping lines will have to overcome a major challenge. The backlash against shipping companies that have enjoyed high ocean freight rates for the past two and a half years is expected to be significant, as the old saying goes, the high peaks of a booming economy are followed by deep valleys.

Container leasing companies are no exception. Leasing companies, which have been enjoying exceptionally favorable conditions with long term lease of 10 years or more, which are similar to finance leases, will be forced to receive surplus container off-hire worldwide from shipping lines. At that time, the leasing companies will lose leasing income from shipping lines and will also have to bear the cost of depot storage. This is a double whammy. Furthermore, the hinterland for container storage at ports around the world is limited. Will the leasing company be able to secure enough space to accept the return of the containers? We anticipate that there will be a phase in which they will have to scramble to do so. 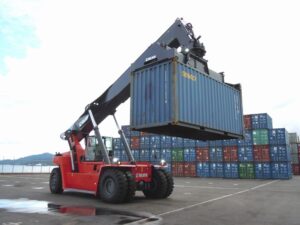 As a side note, in early October, I participated in a purification ceremony of the Kalmar Reachstacker that we delivered to NX Bintsu in Fukuyama. This is the third delivery of seven units we have sold since last year. The Shinto priest delivered the words of congratulation in the solemn ceremony, and I too was filled with a sense of reverence. I was moved by the heartfelt concern of NX Bintsu’s management for their employees as they prayed for the safety of the state-of-the-art machine, and I am confident that the Kalmar Reachstacker, with its outstanding ergonomics, comfort, and ease of operation, will be used by the people onsite with pleasure for a long time to come. I left Fukuyama with my best wishes for the further development and success of NX Bintsu.
(Translated by Ms. Chizuru Oowada)